(Rescheduled from last Saturday due to inclement weather!) 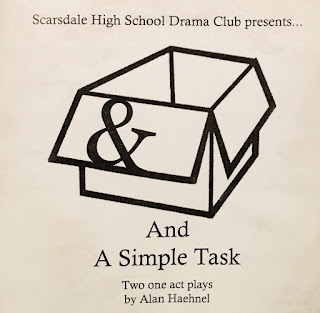 And, a dramatic play, follows Aaron as he struggles to grasp the concept of simultaneity - that at the same time one person might be freaking out over something as small as a hangnail or their boyfriend being a bad kisser, another person might be preparing themselves for their father's inevitable death of cancer.

A Simple Task, a comedic play, follows Empie, who has just been hired for a new job. Her first task is to simply get a box of merchandise, a seemingly simple task. She finds, however, that there is always a new wacky character blocking her path, ranging from a microbe farmer whose farm runs right in front of the box to teachers who will not let Empie get the box until she properly learns how to walk.

Tickets available at the door. Tickets purchased for last Saturday night’s show will be honored.
Posted by FMA at 6:08 PM